The first question people ask me when they hear about this book is not what the story is, or how it’s selling, or if it’s a crime novel but whether the title is a quote from something. It isn’t, to the best of my knowledge, but it does have that sort of ring. You can imagine it in a Shakespearean speech or a classic poem. It took months to find it. While writing the novel I’d used a working title that was way too cheesy (nope, not saying). Then I spent weeks exchanging emails with my publishers, even during my holiday on Kefalonia, chewing over possibilities. Long lists were compiled and considered. The book tells the story of a group of strangers on a train from Manchester to London who are caught up in a devastating event. Some proposed titles reflected the randomness of such tragedy: A Day Like Any Other, Out Of A Clear Blue Sky; others aimed to capture the characters’ response to sudden violence: You Can’t Kill The Spirit, The Kindness of Strangers; but nothing had the emotional resonance we were after. The Silence Between Breaths appears on the last list I submitted, along with other suggestions none of which had half the impact. I love how it echoes moments of the story, mirrors both the tension and the rupture that tears lives apart but also the contemplation that comes with such an experience. It’s an intriguing phrase and calls up a physical response in the reader. It’s perfect. And how I dreamt it up remains a mystery. 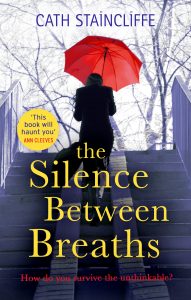 2 thoughts on “The Silence Between Breaths”