THE GIRL IN THE GREEN DRESS

… has been optioned for TV!! When there’s any more news on this, I’ll let you know.

All 9 seasons are now available via BBC Sounds.  And you can now listen to Stone Series 1 – 4 on audiobook.

Cath is the creator of ITV’s hit police series, Blue Murder, which debuted with an audience of 8.4 million and ran for five series from 2003 – 2009 starring Caroline Quentin as DCI Janine Lewis. Cath wrote the following episodes of the show:

Blue Murder has been sold around the globe and the complete series is available on DVD.
Buy here.

Celebrating 21 years of Murder Squad and the release of our new anthology MANY DEADLY RETURNS in a zoom event with Barbara Peters at The Poisoned Pen. Catch it on FB  on YouTube or podcast.

Partners In Crime Podcast – in conversation with Adam Croft and Robert Daws.

Mean Reviews at compulsivereaders.com – what was my worst ever review? See me read it here.

Restorative Justice Dialogue 4  – in conversation with Mary Munro looking at Letters To My Daughter’s Killer – fiction tackling the need to talk and get answers after homicide.

I’m a guest on Rebecca Bradley’s YouTube Channel, discussing writing about victims in crime fiction, in a bite-sized interview. 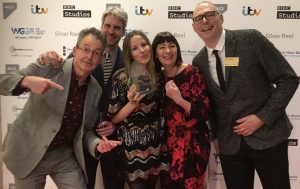 Drama series following a chalk-and-cheese, brother and sister duo of heir hunters whose searches take them into the past lives of families torn apart by events.

FROM FACT TO FICTION