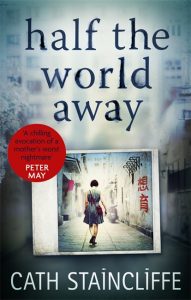 ‘a fascinating glimpse into modern China’ The Sunday Mirror

This book, my twenty-second, is the first to venture outside Manchester. It tells the story of Jo and Tom Maddox, an estranged couple, who reunite in a desperate search for their daughter, Lori, who has gone missing in China. I chose China partly because my son lives there, and it would make the job of research a little easier, but mainly because China is such a fascinating country and so very different from here. A place in the throes of huge development and change and somewhere that my characters would feel completely at sea, unable to understand the language, unfamiliar with the culture and customs. I’d never been to China – or anywhere in Asia – so I’d little idea of what to expect when I visited. Once there, as I gathered background material for the book, I knew it was important to capture the particular feel of the city, Chengdu. Not just with visual descriptions but by conveying the sounds and smells, the tactile sensations of the air and dust, the taste of the spicy food, the atmosphere. Here are some of the pictures I took, and some of these locations appear in the book.

Half The World Away comes out in paperback on July 14th.