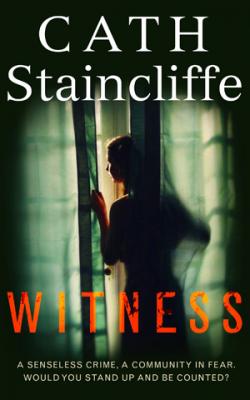 Four bystanders in the wrong place at the wrong time. Witnesses to the shocking shooting of a teenage boy. A moment that changes their lives forever. Fiona, a midwife, is plagued by panic attacks and unable to work. Mike, a delivery driver and family man, faces an impossible decision when his frightened wife forces him to choose  – us or the court case. Cheryl, a single-mother, doesn’t want her child to grow up in the same climate of fear but dare she speak out? Zak, a homeless man, has no intention of helping the police until fate intervenes. A compassionate, suspenseful and illuminating story exploring the real human cost of bearing witness.

‘An intelligent and emotionally engaging moral workout’ The Daily Telegraph

‘Thought provoking reportage about one aspect of modern Britain is combined with a humane, sensitive demonstration of what life is like in an inner-city slum’ Literary Review

I’ve always enjoyed Cath’s novels (and her Blue Murder TV series), but I was blown away by this powerful story of the senseless murder of a young boy who was doing everything right…For those who are looking for something original and not formulaic, they should seek out this beautifully rendered novel” Deadly Pleasures

‘An insightful and evocative journey, one that will stay with the reader for a long while, and spur the reader to explore Staincliffe’s other work’ Deadly Diversions