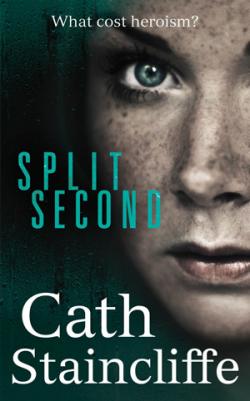 On a winter’s evening, a trio of unruly teenagers board a bus, ganging up on Luke Murray, hurling abuse and threatening to kill him. The bus is full but no one intervenes until Jason Barnes, a young student, challenges the gang. Luke seizes the chance to run off the bus, but he’s followed. Andrew Barnes is dragged from the shower by his wife Valerie: there’s a fight in the front garden and Jason’s trying to break it up. As Andrew rushes to help, the gang flees. Jason shouts for an ambulance for Luke, but it is he who will pay the ultimate price. Split Second, Cath Staincliffe’s insightful and moving novel, explores the impact of violent crime – is it ever right to look the other way?

‘It is incredibly well written … exceptional … some of the best characters I have come across in a while’ http://addictedtolore.blogspot.co.uk/

‘Heartbreaking yet tinged with hope, the best crime I’ve read this year’ Bookclubforum

‘Whereas traditional crime novels would focus on the investigation, Staincliffe’s narrative focuses on the victims, giving voices to those most affected by the crime. It is profoundly affecting’ Killing Time

‘This is absolutely brilliant’ lovereading.co.uk

‘Staincliffe’s characters are real and heartfelt. Staincliffe’s writing is nothing short of brilliant’ Mystery People

‘The topic of this book is hugely relevant in today’s society with the increase in gang violence, which sometimes draws in innocent bystanders. It’s a heartbreaking story, filled with raw emotion, and I highly recommend it’ Crime Fiction Lover

‘Split Second is a truly insightful, thoughtful book – it is short and unpretentious, and very well worth reading’ Eurocrime