I am celebrating this week, after a surprise win at the Daggers Awards on 5th of July.  Margaret Murphy and I jointly won the Short Story Dagger, Margaret with her story The Message and me with Laptop, both from Best Eaten Cold, a Murder Squad anthology, edited by Martin Edwards.  Many thanks to Martin for his excellent work as our editor, and to Matilda Richards at The History Press who approached us initially with the idea of doing a new anthology, also to Barry Forshaw for writing the foreword and, most of all, to Murder Squad.  Since forming, in 2000, at Margaret’s instigation, we’ve been able to support and encourage each other and jointly promote our work and that of the genre as a whole.  I’ve been lucky enough to be short listed twice before, for the John Creasey best first novel in 1995 and for the dagger in the library in 2006.  It is a tremendous honour and a real boost to get on a shortlist (and something to include on book covers and in biographies for time immemorial!).

I can tell you now it genuinely was a surprise to win, there is no subtle whispering in corners to tip you the wink.  So I was very relaxed during the meal before the announcements, not expecting to have to do more than share in the applause.  Our amazement at winning was such that I’m only glad that Margaret was able to string together some words of thanks.  I was useless.

As a reader, when choosing library books, I’d often be drawn by a Dagger reference on the cover.  A guarantee of quality if you like.  I think awarding the Daggers is the most important aspect of the CWA’s work and I’d like to say a big thank you to those in the CWA who have worked so hard to raise the profile of the prizes in recent years.  Congratulations too to everyone who made the shortlists and to those on the long lists for the Gold, John Creasey and Ian Fleming Steel Daggers.  Those winners will be announced later this year.

Finally a massive thanks to all the crime fiction readers out there – the most important part of the equation.

I’m delighted to have won the short story dagger, jointly with my friend Margaret Murphy.  Details are here and I’ll be writing a bit more about it in the next few days.  Meanwhile I am still celebrating!

She was boho, vintage, he was more rock n’ roll.  They met at the retro stall in the bazaar.  Fifteen years later their son, the cuckoo child, sported suit and tie, button down collar.

I read for pleasure – and to feed my habit.  I get antsy if I’ve not got a book available (and one for after I’ve finished it).  My addiction is fiction – stories.  There are many more good books out there than I have time to read so if I’m not captivated by a story early on I don’t persist – life’s too short.  If it is trite or confusing or boring or inaccessible then I give up.  I won’t finish a book just because I’ve read 30 pages. But there seems to be a recent trend for ever longer books.  Novels that I start out enjoying but that lose their appeal as I reach page 300 and realise there’s still 200 to go.  I wish they’d been streamlined, edited more fiercely and were less spun out.  I know contracts often state 80,000 or 90,000 words for a book and perhaps when supermarkets sell books there’s a pressure to offer quantity as much as quality.  I’m a short writer myself (tall woman but skimpy on the page) and always panic about whether I’ll have enough material for a whole novel.  For the record my latest offerings Split Second and Dead To Me come in at 312 and 393 respectively which is something of a mystery to me given I was fretting all the way through about running out of story.  Are writers being asked to write more wrist-breakers?  Is it a question of pacing rather than size?  Perhaps.  After all, I devoured Wolf Hall by Hilary Mantel at over 600 pages and didn’t want to reach the end.  But when I see a book is 400 pages or more I do wonder if it’s worth all those words or if the story would have been better told leaner and meaner.

They all wanted to be cowboys but he liked the plaits.

It was amusing to read in the Guardian Review John Dugdale writing about the trend for copycat book jackets, especially as three of my recent titles fall into one of the categories.  The Single Female Eye.  The book jacket is phenomenally important; it’s what makes the reader pick up the book in the first place or click on the listing.  Though sometimes publishers seem to coy about the notion of imitation.  My first book Looking for Trouble, a private-eye novel, was published by Crocus, a small press, as a result of winning a competition.  On a shoestring, they produced an effective,  three-colour cover (black, white and red) featuring a woman in a car watching a typical Manchester street in the rain.  When I got contracted to a much bigger publisher for my next title in the series, Go Not Gently, they designed a brand new cover.  It featured a woman in a car watching a typical Manchester street in the rain.  ‘Great,’ I said, ‘you decided to stick with the same design.’  There was a flurry of disavowals and denials.  This was four colours, it was a different angle, it was nothing like the first jacket.  Hmmm.

People sometimes ask how much say authors have a cover design.  It’s minimal in my experience (apart from that very first time).  A standard letter goes out along the lines of, ‘We think this is delightful, we hope you agree.’  And that’s that.  To be fair, most of the time it is delightful and I do agree and when I have on occasion raised concerns, which tend to be about the cover not reflecting the tone of the book, I have been lucky to have publishers who have addressed them.  But involvement in the process, chatting with a designer, or thinking up ideas or motifs?  Nope, doesn’t happen.  The most bizarre jackets tend to be foreign translations where one can only assume that cultural differences account for the bemusing designs.  For example the Chinese edition of The Kindest Thing, my novel about assisted suicide, shows a woman in a billowing white dress, face obscured by windblown blonde hair, standing in a wheat field.  But they must know what sells for their market.  Meanwhile I’m waiting to hear about design ideas for my next novel – I’m betting on another Single Female Eye.

‘Don’t step in the mud!’ her mother shrieked, and her father yanked her clear.  Grown, she became a potter, slathered up to her elbows in sticky clay, making up for lost time.

Late May was Crimefest in Bristol.  Among the highlights for me was listening to Sue Grafton interviewed by Maxim Jakubowski about her life of crime.  She was by turns witty, insightful, intelligent and warm.  It was also a delight to listen to James Sallis (whose books I love for their language and sense of humanity) debating on panels with other great writers like Andrew Taylor and Sophie Hannah.

A very special event was the discussion hosted by Barry Forshaw between Søren Sveistrup and David Hewson about The Killing – the TV series and David’s recent novel.  We learnt a lot about the process of creating the groundbreaking show as well as the challenges for an author writing a book that both honoured the film and stayed true to the demands of a piece of fiction.  Elements from the TV did not work as prose and David had early agreement that where the demands of the book required he would alter elements of the story.

One aspect that particularly intrigued me was hearing Søren talk about the differences between series 1 and series 2.  Not only was series 2 half the length (at 10 episodes) but there was a conscious decision to do something different each time.  Søren spoke of how the first series was very emotional in its depiction of a loving family torn apart by their loss and he did not want to cover the same emotional territory in the second series.  So series 2 was deliberately less emotionally moving.  I’ve already talked with friends about how I found series 1 much more compelling and suddenly those reactions make sense.  I’m a sucker for a good weep!  Although I was still hooked as a viewer, I didn’t care about the characters in the second series nearly as much.  Søren says he’ll be going somewhere new again with series 3.

Meanwhile David’s novel, one of three he will do, is getting rave reviews.  He spoke of having to radically change his writing style to find something that fit the tone and style of The Killing and of having two screens at his computer, one playing the DVDs and one where he typed up his interpretation of the story.  Apparently the ending is different from the TV version.  I’m writing the Scott and Bailey novels and the business of writing characters that other people have created interests me a lot.  You want to get it right but you also want to bring your own skills to bear on depicting them in action.  One thing is clear, the two media are very different and in order to enter these sorts of projects everyone needs to be happy embracing those differences.

His fish were thin and his chips were soggy but he’d a lovely line in sauce.

I’m just back from Crimefest in Bristol.  A busy and interesting weekend with some fascinating panels and discussions which I’ll write more about next time.  On Friday evening the shortlists were announced for six of the CWA Daggers and I was delighted to be included in the Short Story shortlist for my story Laptop from Best Eaten Cold.  A big thanks to Matilda Richards at The History Press for commissioning the anthology, to Martin Edwards who edited the book and Barry Forshaw for the foreword.  Congratulations too, to fellow Murder Squaddie, Margaret Murphy, who is shortlisted with her story The Message from the same anthology.  We’ll find out who has won on 5th July!  Meanwhile you can find out all about the shortlist here http://www.thecwa.co.uk/daggers/2012/short.html. 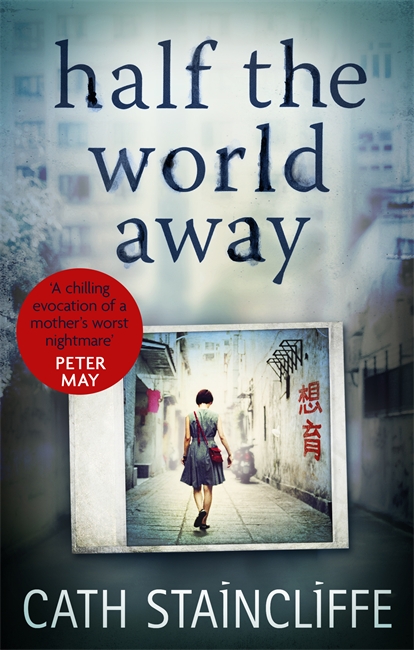