That was the word count* for my story Homecoming in the new Murder Squad and Accomplices anthology. A story inspired by a black and white photograph. Like many novelists I take the opportunity in between writing books to try my hand at short stories. It is a great way to experiment, to try out new styles and develop characters and situations that perhaps wouldn’t suit a full length novel. This project with publishers Graffeg was particularly enjoyable, combining as it does photographs and prose. If you’ve ever gone to creative writing workshops you’ve probably been asked to write something based on a stimulus – a phrase or a physical object, a newspaper cutting or a piece of music. I love that sort of exercise which I think often serves as a door opening, giving us permission to be inventive and go wherever our imagination takes us. For The Starlings And Other Stories we each chose a photograph from David Wilson’s Pembrokeshire book. The one I selected was of an isolated and derelict house. It immediately made me wonder whose home it had been, where they had gone, why the house had been left to rot and what would it be like for someone who’d lived there to return. You can find the answers to those questions in my story. And now I’ve read the whole of the anthology I can highly recommend it. It is fascinating to see where people went from that initial springboard of a single image.

*For those who recall my post about not doing word counts – I do tally up at the end and usually my heart sinks. But that’s not an issue with short stories 🙂 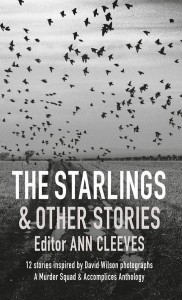